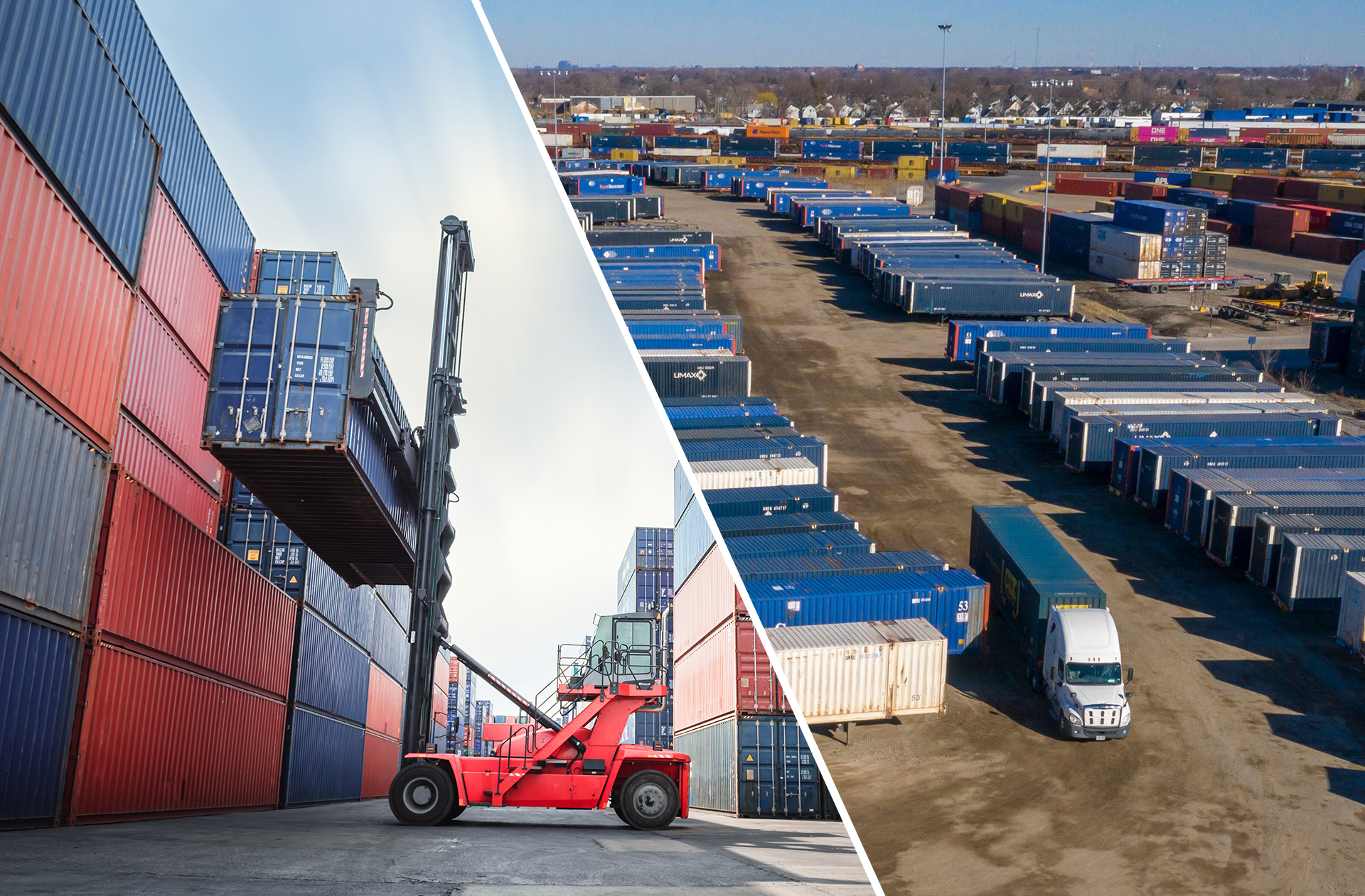 The debate continues over which is more efficient, but a more nuanced perspective looking at a range of criteria finds a variety of solutions leading to what is an elusive decision.

"There is no one-size-fits-all solution to the challenges facing the industry as it pertains to handling international containers at our facilities," says Chris Luebbers, assistant vice president, planning and yield, intermodal & automotive, for Norfolk Southern Corp.

Wheeled terminals date to the beginnings of the intermodal era and evolved in many locations where available land was for the most part relatively cheap and abundant. Operators could store containers on chassis until pickup, with a goal of minimizing handling for best efficiency.

Today, the grounded terminal where containers are stored in stacks has become the norm, particularly in crowded urban areas in and around ports where land is increasingly expensive when and if it is available.

For example, in New Jersey a vast warren of warehouses that for decades served rail-to-truck transloading was demolished to make room for expanded intermodal yard operations at Port Newark Container Terminal. The 263-acre PNCT handles 1.49 million TEUs of volume annually, and has 10,000 feet of tracks served by Norfolk Southern, CSX and Conrail Shared Assets Operations. It’s spending $500 million on expansion by 2030, as total volume through all of Port Newark neared 8 million TEUs in 2021 – a flood of pandemic-accelerated volume that wasn’t projected until 2025 or 2026.

"Each market and terminal have their own set of characteristics that determine the best operating model," Luebbers says, "including terminal layout/capacity, volume density, dwell, and local drayage capacity to name a few. Norfolk Southern continually reviews its operations and the best way to operate each as we evaluate our long-term growth plans, which will likely include both wheeled and grounded operations."

"While several factors need to be considered, generally, grounded terminals tend to be a more efficient terminal design with respect to the ability to provide more container throughput per acre, and offer more opportunities for efficiency and automation," says Rob Giradot, CSX director of strategy & analytics, intermodal. "Grounded terminals offer benefits to the supply chain, particularly in today’s capacity constrained environment where chassis are in limited supply."

Like most links in the global supply chain, the Covid-19 pandemic laid bare the weaknesses in terminal operations, which were exacerbated by the effects of a shortage of chassis, extended dwell times, and lack of available labor. It’s a combination that has executives rethinking the most fundamental aspects of intermodal container transportation.

"Given the current shortage of truck drivers and also warehouse staff, leading to substantially increased container dwell times, the common wheeled parking approach is highly challenged," says Christoph Schoppmann, head of terminal planning and logistics–intermodal at HPC Hamburg Port Consulting GmbH. "Why? Boxes are not being picked up by truckers and are sitting on their chassis; also the turn-time of a chassis is significantly increased, leading to a short supply of chassis. This is certainly not leading towards higher attraction of wheeled operations, at least for the time being."

Street dwell remains a seemingly intractable issue that as a matter of function fouls wheeled operations, though the time a chassis sits at warehouses and truck lots has fallen by half from seven days or more in late 2021. Says Michael O’Malley, senior vice president government & public relations for chassis provider DCLI, "Is this a new normal? There is a different kind of dynamic going on here than the industry has seen before and the impact, too. It is difficult to normalize two times the average street dwell."

The situation has only been compounded by ongoing punitive tariffs that have shut down imports of chassis produced in China. Domestic manufacturers have been ramping up production, but there has been a gradual increase from order to deployment of new chassis to nine months from the usual three. At the same time, greater control of maintenance and repair by chassis providers has improved the rate of chassis out of service to 2-3% from 6-7%.

"The challenges in the North American supply chain have resulted in record-setting import volumes throughout 2021, with no signs of this abating in 2022," says Matthew Wittemeier, senior manager of marketing and customer relations at INFORM GmbH, an optimization software provider. "Combined with record shortages in drayage solutions, congestion at distribution centers, and [other] inefficiencies, terminals of all types are becoming more congested with increased dwell times and terminals close to, and in some cases exceeding, capacity are the new normal."

In some places, intermodal transportation ran up against zoning restrictions that limited expansion of ad-hoc grounded and storage operations when operators needed it most. The city of Long Beach temporarily relaxed enforcement of a ban limiting stacking of containers on private property from two to four or five high, to help the flow of boxes through jammed terminals. Ecological factors surrounding container terminals and accompanying truck traffic will also weigh on development.

"There is a capacity constraint for potential additional volumes in highly populated areas, where there is hardly any room for expansion," says Schoppmann. "Here, stacked operation is certainly a valid and proven means for densification and increased area efficiency [in existing terminals]. On top, there is more flexibility in a grounded operation regarding the use of space, i.e., there are options to at least temporarily further densify the storage. The existing infrastructure in grounded terminals can handle it and also the required equipment for a grounded operation is already available."

At some of the largest international container gateways, the availability of on-dock rail capacity may help ease congestion at intermodal terminals, on both coasts. Said Luebbers of NS, "Norfolk Southern continually reviews its operations and the best way to operate each as we evaluate our long-term growth plans, which will likely include both wheeled and grounded operations."

Conversely, a growing trend of importers transloading or draying cargo to DCs, warehouses and other destinations, rather than moving intact container shipments inland by rail, could put even more pressure on grounded operations. It remains to be seen whether this is a permanent change in intermodal transportation.

Ocean carriers also have been requiring reliable and flexible inland transportation connectivity. In fact, there have been early signs of more vertical integration by vessel operators, especially in Europe, in order to control more segments of the supply chain from marine terminals all the way to investments in inland rail facilities. In the U.S., in February Maersk acquired forwarder Pilot Freight Services for $1.6 billion, another step in the Danish carrier’s plan to offer end-to-end services. In 2021, it picked up Visible Supply Chain Management of Utah and warehousing provider Performance Team in 2020.

So, wheeled or grounded?

"In truth, the answer is 'it depends,'" says Wittemeier. "In general, stacked [grounded] operations offer many benefits which we need to consider more strongly (e.g., sustainability goals and densification where land is increasingly confined). However, wheeled operations are established, and generating the strongest ROI on these existing assets should be a priority." Says Giradot of CSX, "A variety of factors are considered when embarking on rail terminal projects including geography, market density, rail access and potential to help meet business growth. The primary terminal location criteria are rail access and a location within the CSX network, preferentially directly accessible to a CSX mainline intermodal route."