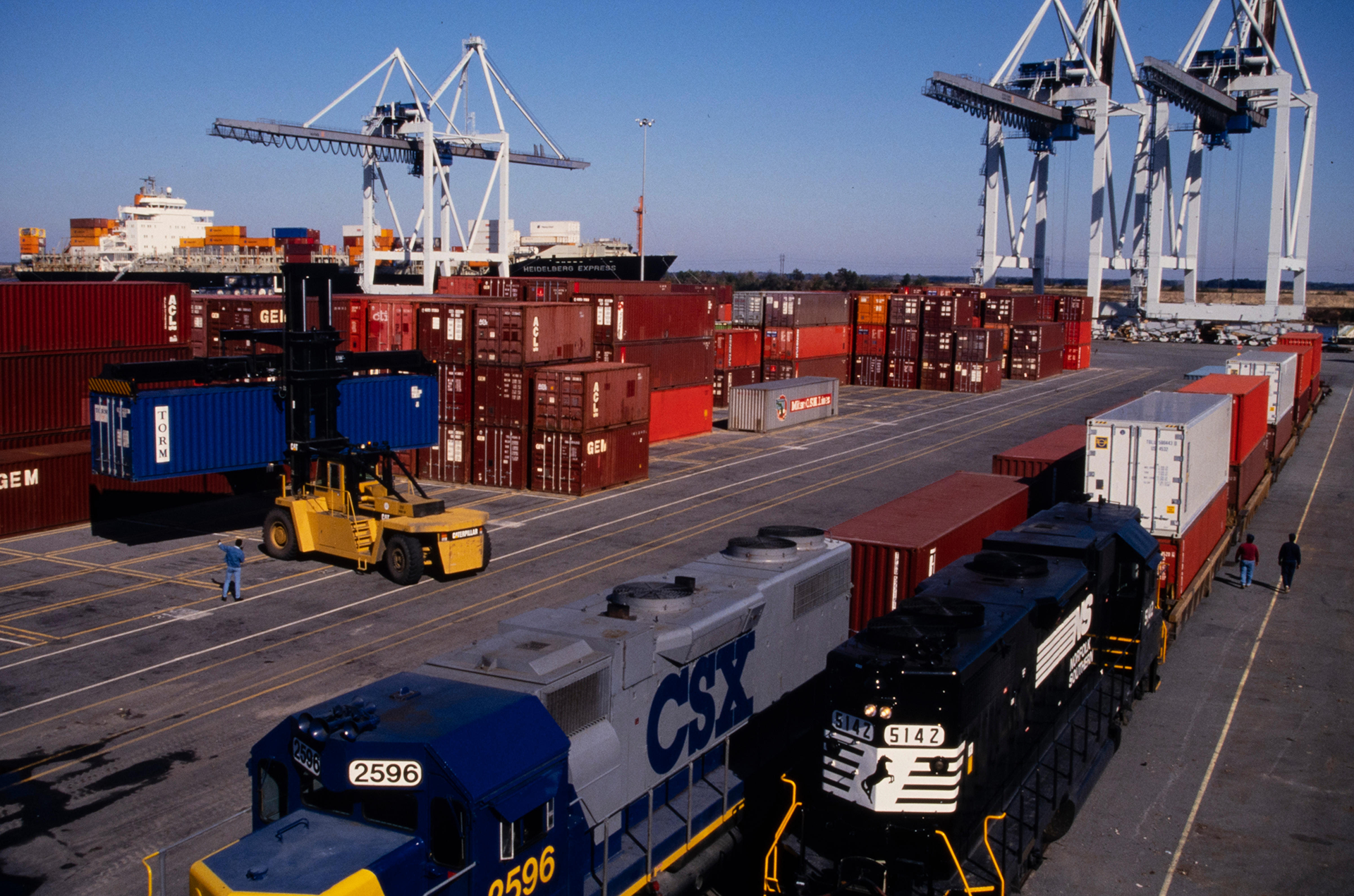 Ports continue to invest in on-dock rail to improve fluidity, but trucking containers to inland terminals, distribution centers and warehouses could be at the vanguard of a sea change helping to check a number of boxes for beneficial cargo owners.

Earlier this year, some container gateways had the "space available" sign out for on-dock rail, according to published reports, as importers and other BCOs increasingly opted to transload or dray containers inland. This was due in part to expediency amid the crush of cargo and shortage of chassis, but also in regard to the bottom line, as steamship lines hiked rates for inland destinations in a bid to keep the flow of empty boxes moving back to Asia ports, to load more trans-Pacific traffic.

The increase "was done out of necessity," says Gene Seroka, executive director of the Port of Los Angeles. "We started to see backups from rail yards and interior points all the way to the port and back towards Asia. Importers needed to get their product to market and stop the containers here in Los Angeles and move them domestically to their points and locations inland. This was a short-term phenomenon that we believe is now corrected."

As dozens of container vessels waited to berth, and supply chain issues became national headlines, Los Angeles/Long Beach – the busiest container complex in the U.S. – announced a series measures aimed at improving cargo flow. Chief among these was a container dwell fee that would charge ocean carriers for containers that remain too long on the docks.

"The fee has been delayed several times and is considered on a week-by-week basis," says Mario Cordero, executive director of the Port of Long Beach. "The San Pedro Bay ports combined have seen a 67% decline in aging cargo on the docks since the program was announced on October 25, 2021. Terminal operations continue to improve thanks to the long-term container dwell fee, but there is still a high volume of import cargo on its way. The Port of Long Beach is currently exploring enhancing inland port connectivity to further efforts toward combating congestion."

Transloading also provides the BCO with additional flexibility as the destination for the goods can be determined weeks or even months later than is the case with direct movement of the container via Inland Point Intermodal, says Larry Gross, president of Gross Transportation Consulting. "Secondly, the domestic intermodal carriers generally offer a wider choice of destinations than does IPI. Finally, there is the 3:2 cube advantage which enables three 40-foot ISO containers to be consolidated into two 53-foot boxes.

"The trend is for transloading to take more share of the inland movements from Southern California and that is expected to continue."

Says Salvatore Ferrigno, vice president of West Coast terminal operator SSA Marine, "There is evidence of chassis being on the street for an average of 10 days compared to the historical 4.5 days. That supports the fact that containers are not being unloaded/loaded due to the labor shortages at the off-dock warehouses."

The shift to trucks has also had a heretofore unseen follow-on benefit for shippers.

"Speed, flexibility, postponement distribution, cost savings of transloading ISO containers into domestic boxes and rail it to the final destination," says Mark Bartmann, vice president of Seafreight Drayage Solutions for Kuehne & Nagel. "But it also means being a better customer for ocean carriers who want their equipment back, and therefore getting space and better ocean rates."

While container traffic through East Coast ports hasn’t experienced the same congestion as their West Coast brethren, at least one gateway has been proactive in leveraging its advantages to keep cargo moving. The Georgia Ports Authority has established five "pop-up" inland container yards with 410,000 TEUs of capacity, in Savannah, Atlanta, Statesboro, Murray County, Georgia., and Rocky Mount, North Carolina.

"Moving containers to strategically located inland yards serves two main purposes," says GPA Executive Director Griff Lynch. "It stages cargo closer to manufacturing and distribution centers, and it clears space at marine terminals, allowing for more efficient vessel service and terminal operations." The pop-up terminals have improved the speed of cargo handling, including container dwell and vessel turn times, and GPA plans to continue to use them in the medium-term.

Other executives observe that in an evolving landscape, there are fewer benefits to moving cargo intact versus transloading.

"Amazon has 200-plus distribution centers; Walmart has more than 150. The big intermodal customers have too many DCs to plan to move intact," says Ted Prince, co-founder and chief strategy officer, Tiger Cool Express, LLC. "Cargo is going to too many places, and the cost is just too high. Transloading is about strategy such as inventory deferral and allows the importer to wait until the very last minute, using point-of-sale data, to decide where they want to send stuff."

But what appear to be medium-term adjustments could, in fact, be the beginnings of epochal shifts that portend permanent change in the busiest U.S. import gateway.

"This has already transformed the Southern California import container mega-verse," says Shelli Austin, president, InTek Freight and Logistics. "Many BCOs have either reduced or completely shut down their use of the SoCal ports and moved their imports to New York, Virginia, Texas, and Georgia. These other ports don’t have the same infrastructure to support the higher volumes, and it is causing congestion and backlogs in each of these areas with labor, warehouse space, chassis, and trucking."

In the longer view, the increasing use of trucks could end up being a net-positive for on-dock rail, particularly in Southern California.

Libby Ogard, president of Prime Focus, LLC, says ports there should "educate the public, who elect local policy makers, about how on-dock rail could change truck volumes on local interstates, and how environmentally-friendly container handling equipment and locomotives could provide real benefits to support an on-dock rail scenario. I would like to see a supply chain commission do a fair and balanced study of on-dock rail versus drayage in SoCal, to determine the environmental impacts and safety benefits to support railroad development. Of course, this will only work if the ocean carriers model U.S. distribution and supply chains and agree to support the increase asset cycle time."

At the same time, ports continue to develop on-dock capabilities with their rail partners.

"We're all in lockstep," says LA’s Seroka. "As we invest, ‘densifying’ the on-dock rail capabilities is a top priority at the port of Los Angeles. Compared to other ports on the East and Gulf coasts, we've been out-invested 11:1 over the last 10 years. Now, with the new federal infrastructure law, we have an opportunity to get our fair share based on the amount of cargo that moves through the Southern California gateways. The outcomes are straightforward. Let's alleviate the stress of the trucker community while building that profession and simultaneously investing deeper on-dock and near-dock rail capabilities that will get product to markets in the United States."

The Pier B On-Dock Rail Support Facility at the Port of Long Beach is the centerpiece of a plan to invest more than $1 billion in rail infrastructure over the next 10 years.

The new facility, scheduled to start construction in 2023, will enhance on-dock rail capacity at the Port’s shipping terminals, speeding the movement of cargo and strengthening the Port’s competitiveness. "Increased use of on-dock rail is a necessary part of sustainably handling increasing capacity demands," says Cordero.

On-dock rail makes sense for railroads, in an era defined by streamlined operations.

"Norfolk Southern has been a strong partner in the development of on-dock rail capacity at the various ports along the East Coast," said Chris Luebbers, assistant vice president, planning and yield, Intermodal & Automotive. "The efficiencies provided from direct ship to rail loading and unloading play a big role in the long-term growth of intermodal. This is particularly true in today’s environment of tight drayage capacity and chassis supply at major port areas. On-dock services avoid these two challenges and reduce the number of hand-offs a container makes, improving the throughput of the entire supply chain."