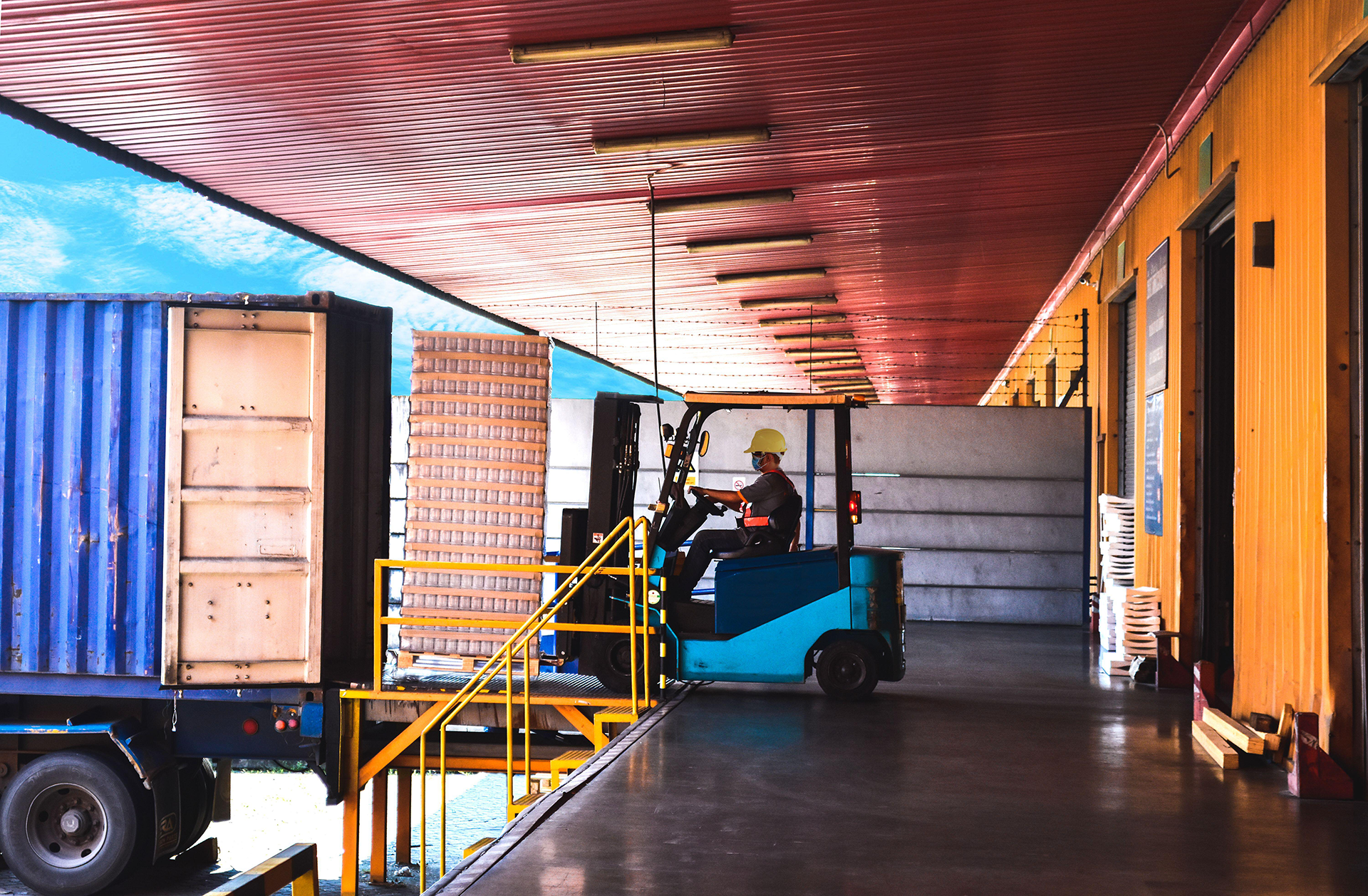 A critical link in a changing supply chain, transloading increasingly is how container transportation gets done, executives from ports, truckers and logistics providers told Intermodal Insights, as they seek more flexible options to meet the needs of shippers.

As at other gateways, the Port of Savannah has reported a shift away from containerized cargo moving by rail versus truck. Through March of this year, rail volume totaled 123,068 containers, or 16.13% of 763,022 total containers moving through the port. This compares with 144,030 rail containers, or 19.33% percent of 745,237 total containers, for the same period in 2021.

"The shift is related, in part, to an increased preference among ocean carriers to speed the turn times of containers destined for export back to Asia," says Georgia Ports Authority Chief Operating Officer Ed McCarthy. He was referring to Inland Point Intermodal, which covers inbound freight moves by an ocean carrier from a port to a consignee’s door rather than an inland rail terminal or container yard. "Another factor is that, in light of delays related to global logistics challenges, trucking is considered a faster mode of transit for final deliveries."

Because of high demand for containers, ocean carriers have seen a decline in IPI volumes in order to keep boxes closer to the coast. "Instead, more containers are flowing to nearby distribution centers, where they are emptied and the cargo is repacked into company trucks or 53-foot vans or containers," McCarthy says. "This allows the empty boxes to be returned to port and shipped back overseas quickly."

In warehouse-centric Savannah, the GPA is in the process of expanding its transloading infrastructure, adding 90 acres and a 300,000 square-foot transload warehouse and container yard at Garden City Terminal.

To be completed by Spring 2023, the yard will be served by nine rubber-tired gantry cranes and have annual capacity of 300,000 TEUs. The project also includes a staging yard for wheeled containers. Says McCarthy, "The facility will help to meet a demand for transload services, allowing customers to move cargo directly from the docks to destination markets or distribution centers."

The port also is looking into the storage and handling of 53-foot domestic containers, with capacity to fit the contents of nearly two 40-foot ISO containers, to help customers moving cargo inland to the rapidly growing warehouse and DC market.

Currently, "a major retailer is transloading its cargo into 53-foot containers for rail transit from the Port of Savannah to GPA’s Appalachian Regional Port in Northwest Georgia," says McCarthy. "Should sufficient customer demand for 53-foot containers arise, GPA is prepared to make the investments needed to provide that service."

The Port of Jacksonville, Fla., took advantage of transloading to avoid a potential disaster involving thousands of tons of imported frozen chicken.

"It was something I had never, ever seen," says Alberto Cabrera, JAXPORT’s director of cargo sales.

"In January we were unloading palletized frozen chicken straight from the ship to refrigerated trucks to a refrigerated warehouse a couple of miles away. I hadn’t seen breakbulk chicken since I worked as a stevedore many moons ago."

The chicken arrived on pallets due to a shortage of refrigerated containers at the point of origin, which was fine, except dockside refrigerated warehouses at JAXPORT "are ancient history," Cabrera says. "It was the perfect storm, a choreographed ballet with palletized chicken. You have to have the equipment standing by, ready to load. We were doing what we had to do."

Eventually, the transload within a transload took 204 truck turns over a four- to five-day period to move 4,500 tons of chicken to refrigerated facilities outside the port. Cabrera, who hand-stowed boxed chicken back in the day, says the most difficult part was getting enough trucks, "but you can within sufficient lead time."

Elsewhere, drayage and logistics provider NFI Intermodal has also seen a shift to transload, and how it spread through the supply chain.

"Domestic truck and rail carriers could not have been prepared for the ripple effect of shifting demand away from inland movements to a transload-centric operating model," says Mark McKendry, senior vice president, Intermodal. "Ocean carriers have prioritized empty movements back to major Asian markets due to enhanced profitability and higher asset-velocity. It has created a substantial impact on the domestic supply chain [for] the Class I railroads, exporters, domestic shippers, chassis and container providers as well as over-the-road motor carriers."

For railroads, McKendry says this changes the mix between domestic and international intermodal volumes and ultimately substantially suppresses overall volumes. It also hurts U.S. exporters who rely on the IPI empty container supply to meet their shipping needs.

"It also challenges domestic repositioning carriers in their efforts to service an inland customer base that strongly prefers 40- and 45-foot containers," says McKendry. "The market effect from this change in mix has essentially led to transloads 'soaking up' excess available 53-foot [domestic] container and chassis capacity to meet the needs of their import clientele," along with a tight labor market lengthening container turn times. The challenges faced on the West Coast are also presenting across eastern ports, too, he says, although the lack of comparable transload capacity on the East Coast has exacerbated the chassis issue in a few different markets.

McKendry says there are too many questions to answer before terming the shift to transload as permanent.

"What if supply and demand balances out the profitability across import business and export business for the ocean carriers?" he asks. "The trade gap between import and export is surely here to stay, but history supports the theory that the preference to transload versus move via IPI can move around, just as it did in 2020 and again more recently in March. Another key question is whether or not the Federal Maritime Commission will eventually rattle the regulatory sabre and take a 'pro-exporter' stance, which would shift volumes back to IPI for some key regions."

Transload infrastructure is increasing on both coasts but being disciplined about this investment needs to be prioritized as the marketplace continues to face variability, says McKendry. "We also need to keep in mind that Class I operating methodologies very much adhere to the principle of not 'building a church for Easter Sunday,' so I think the question is more easily answered once the volatility in the marketplace settles. Having said that, getting transload employee pay 'right' will go a long way to increasing transload fluidity in the short-to-mid-term and that will help free up chassis and container supply and ensure that asset turn times normalize."

"Shippers are buying as much product as they can and building safety stocks to be resilient for demand when products run short," Ehrensaft says. "They need space to house all the extra product, so they’re turning once again to warehouse providers. While companies in an effort to streamline the supply chain worked to avoid warehousing costs and didn’t want to pay to store their product – it hit the dock and it was a pure transloading play. Many shippers and receivers will not totally abandon that model, but now because the model has been disrupted, most are developing backup contingency in the form of multiple suppliers and more forward stocking inventories.

"Warehousing is an essential component to that backup."

Ehrensaft says that warehouses that have any extra capacity are filling up in one to two weeks, if that long. "Those with extra warehouse space and some with very little are open to do pure transloading, but we’re seeing that companies want to store their inventory, pull product as needed and have it delivered the final mile to their customers. We have customers today that are dropping containers in our yards, and they rely on us to pull them to the warehouse door for unload. Drivers delivering the next drop containers pick up the empty containers, return them to the yard, grab another full container and continue to repeat the cycle."

Increasingly, he says, importers are moving product to store and stage their inventories into high-density areas such as Chicago, where availability of equipment and multiple options for inland moves are more robust.