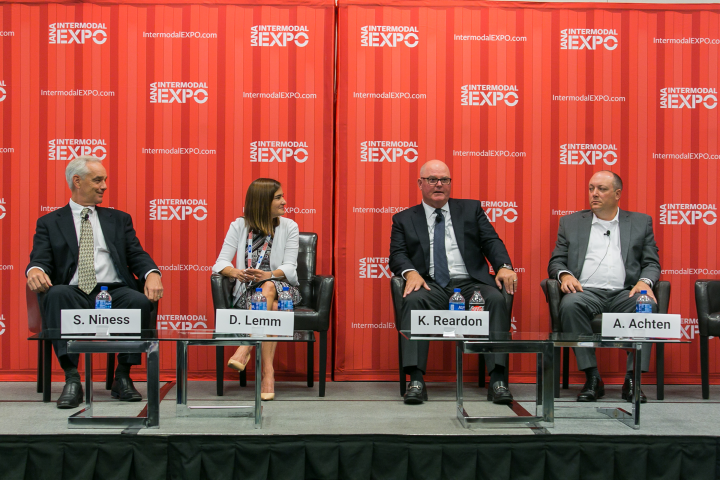 Reliability, consistency and driver retention are some of the big issues surrounding intermodal network capacity and addressing these issues will require concerted efforts throughout the industry.

That was one of the overarching messages that emerged from members of the trucking, rail and ports industries during the annual Intermodal EXPO. Of the industry issues that need to be addressed, at the forefront is trucker retention, Mike Burton, president of Chicago Ridge, Illinois-based C&K Trucking said during a panel discussion on whether trucking capacity is at a crossroads.

"With 3.5 million drivers out there overall in the trucking industry, the average age is 49, it looks like over the next six to seven years, 400,000 to 500,000 of them are going to retire, and we have a shortage right now, and it’s only going to increase," he explained.

"The labor capacity is really the bottleneck at the moment," he said. "We have the trucks to move all the freight that needs to be moved right now. Most of the labor fleets that we cover, 5-to-10 percent of their trucks are parked up against the fence right now because they can’t find drivers to seat them."

Demand from other truck sectors, he said, is pulling drivers away from drayage.

"We’re seeing a big impact from that. 20 to 25 percent of the drivers we lose leave the industry," he remarked. "We’re losing drivers to the construction marketplace, to the manufacturing marketplace, like what we saw in 2006, 2007. If we look out two years, we see that trend continuing."

The issue of driver retention was a major one discussed during a panel on intermodal network capacity.

"Is there a driver shortage? Yes, in our neck of the woods, there absolutely is. Retention, recruitment is on our minds every single day that we go to work," Donna Lemm, an executive vice president with Memphis, Tennessee-based marine drayage provider IMC Companies, said.

Lemm said that some major railroads are in the midst of having daylong discussions with truckers and drayage providers regarding making the drivers’ experience better.

"As employers, we’re making the drivers’ experience the best that we know how," she said. "We’re spending a lot of time educating and advocating for the driver."

Also during the network capacity panel, Adam Achten, a vice president with Green Bay, Wisconsin-based transport and logistics company Schneider, said that driverless vehicles won’t be a solution to the retention issue, at least not in the near future.

"Autonomous trucks are further out than most people are projecting right now," he said. "I think public acceptance of a driverless vehicle is still a ways away."

Achten also said that consistency and speed are the two issues they always need to consider when dealing with shippers.

"What we found from talking to our shippers, is that they’re really looking for that consistency," he said. "The big factor there is that trains run on schedule. Drivers do not have set schedules and set routes, for the most part. There’s an unreliability based on ship patterns that intermodal does not have."

Rob Nichols, managing director for domestic intermodal sales and marketing with Canadian Pacific Railway, said that the conversion from truck to rail in the industry "is something that is going to continue to be prevalent.

"It’s not really about faster; it’s really about the reliability," he said. "So when we’ve polled our customers about what’s the most important thing, consistently we’ve come back with creating some choice and then doing what you say you’re going to do by delivering on time. And I think that’s really been the recipe for us in Canada."

Regarding reliability, Keith Reardon, a senior vice president with Canadian National Railway, said the issue is a regional one and that in some areas, investments need to be made.

"We’re spending a lot of money on double tracking, increasing our sidings, buying locomotives," he said, adding that reliability is "not only over the road, but in the terminals as well.

Another issue addressed during various panels at the three-day EXPO was that of the electronic logging devices that are now required to record truck driver hours of service. Nichols said that logging devices will be a boon to the intermodal industry. 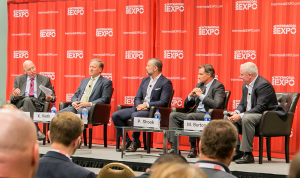 "As ELDs take hold — and ELDs are coming to Canada at the end of 2019, early 2020 — I think what you’re going to find are lanes where that carrier just runs out of hours," he said. "They’re no longer going to want that head haul if the back haul is limited and they can’t get back in a certain amount of time. I think that’s going to create a tremendous opportunity as we move forward."

"What we found from talking to our shippers, is that they’re really looking for that consistency."
Adam Achten
Vice President, Schneider

Doug Punzel, president of intermodal with Tinley Park, Illinois-based transport services company Celtic International, said that ELDs have had an effect since they became mandatory in the U.S. in December 2017, but not necessarily a positive one.

"I think with the ELD implementation, we’re finding it much more difficult to find drivers that will go 200-plus miles from the rail hubs," Punzel said.

"There’s both short movements and long that would benefit from additional train options. Unfortunately, we’ve been seeing more of a trend the other way, and that’s been a challenge for us, in that there’s probably fewer options for our customers today than there was a year ago."

Also during the discussions, some panelists said they expect capacity to remain tight through at least 2019. ACT Research President and Senior Analyst Kenny Vieth said that capacity will still move freight over to intermodal.

"We have to get more capacity out of the infrastructure investment and equipment than we already have," he said. "Also, when it comes to the terminal infrastructure and the ramps, when a train comes in, it’s gotta come in and then out the gate; no parking, it can’t wait."

Such a scenario isn’t currently feasible, he said, because terminals aren’t currently open 24/7 to load and unload, and neither are most warehouses.

"So, that storage, that dwell, that parking; where’s it going to take place and what’s it going to cost? Is the capacity there? Yes. Is the demand there? Yes, but how we utilize all of our investments collectively to unlock that capacity, that’s really going to be the key going into next year."

When polled, the vast majority of audience members said they expected trucking capacity to remain tight in at least the short term.

Burton said he believes that capacity is going to continue to be tight over the next couple of years.

"From the demand side, the economists are all saying the economy’s great," he said. "The only wild card is what happens with tariffs and will they impact our international trade."

"Going into next year, I think the [U.S.-China] tariffs are really going to play a pretty significant role," he said. "How widely they get rolled out, how broadly it impacts the overall consumer spending. I think there’s a lot of uncertainty around next year, but we’re cautiously optimistic."