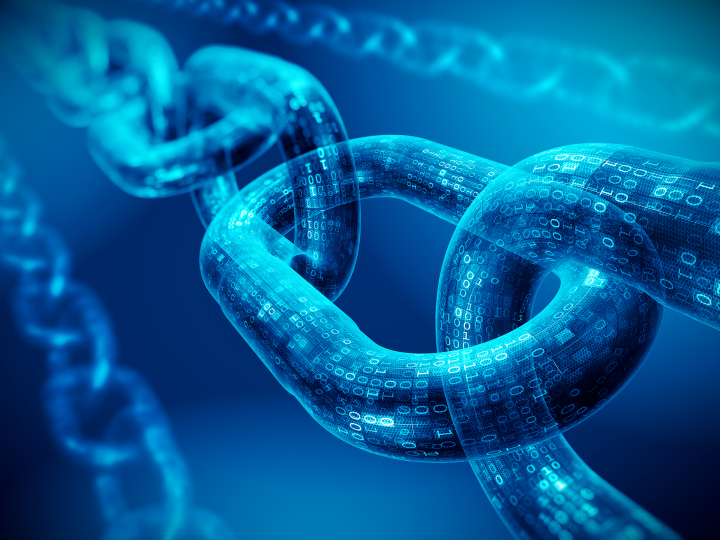 The concept of using emerging blockchain technology to improve the supply chain, and the visibility of freight moving intermodally across it, is gaining increasing attention.

Blockchain has been described broadly as a distributed, web-based method of record-keeping that can accelerate transactions while also enhancing accuracy and security. Each "block" of data is "chained" together with unique output stamped onto each succeeding piece of data. It is shared with digital signatures, giving each participant access to a ledger shared in real time.

Early in 2018, ocean carrier A.P. Moller - Maersk and IBM drew significant attention by announcing a blockchain venture which was presented as "a jointly developed global trade digitization platform." The stated goal was to increase data transparency as transactions were executed faster, with lower costs.

The process is being designed to share benefits to partners throughout the global intermodal freight network, including manufacturers, shipping lines, freight forwarders, port and terminal operators and customs authorities.

Blockchain is appealing, Maersk and IBM said, because of potential cost reductions in trade documentation. Such documentation represents as much as 20 percent of the $4 trillion cost in worldwide cargo shipping, which primarily moves through ocean freight. During March, the joint venture CEO Michael White said 24 companies already have signed up to participate.

The companies have been conducting pilot tests of blockchain since their collaboration began in June 2016, but some regulatory hurdles still exist.

There are some reservations, or at least questions, about blockchain in the logistics community, perhaps because it is so new.

There were signs of interest, as 30 percent saw value in the widespread use of blockchain, two thirds saw potential for freight traceability, and there was substantial interest in using it to enhance freight visibility.

A white paper by technology company Amber Road urged a broader effort to create a "consistent, plain English brand message that links blockchain capabilities to the resolution of supply chain problems." "If blockchain has any hope of becoming the ‘new, new thing’ for international business, solutions have to be created that allow for the true integration of the interdependent activities of all supply chain players and functions," the white paper stated. It also raised the prospect that blockchain would fall short of its potential if the only benefits were to enhancing stand-alone activities, such as placing a purchase order, without overall improvement that includes related activities.

Three technology companies involved in blockchain development are optimistic about its potential.

Tim Leonard, chief technology officer at TMW Systems, envisions blockchain-related benefits across all parts of the intermodal freight spectrum. At the same time, he noted that transport users have been slow to embrace blockchain, possibly because of uncertainty about its costs. "Blockchain evolution in transportation didn’t happen very quickly," he told Intermodal Insights. "Potential users won’t make decisions about the technology without understanding the opportunities."

Mathew Elenjickal, CEO of FourKites, said distributed ledger technologies, or DLTs, are promising for intermodal transportation. In a deeply fragmented system where companies interact on a "many to many basis," FourKites believes there needs to be a system that "facilitates data sharing without friction, and with fine-grained data access rights, so that only the right parties can see the right information."

Tom McLeod, president of McLeod Software, said, "We expect all sorts of supply chains to take advantage of blockchain technology. It is not just a transportation transaction that will employ it, intermodal will certainly be involved in these blockchain-enabled supply chains. The same is true for truckload, LTL and airfreight."

Leonard said TMW has identified 54 business cases in transportation where blockchain can apply to 3PLs and motor carriers, enabled by the improvement in encryption software to ensure data security.

He also offered the example of insurance verification for brokers, saying that blockchain could reduce the time needed for such action to 5 or 6 seconds from the traditional 20 to 30 minutes.

Elenjickal said that blockchain represents a set of evolving technologies that can be used together with significant potential to reduce errors. The technology can be used to address the consequences of poor information, processing delays, manual errors and other barriers to efficient transportation record-keeping.

"Intermodal fits the blockchain concept perfectly because it can tie together disparate information systems through the use of DLT."
— John Kingston, head of community engagement
Blockchain in Transportation Alliance

"We know that carriers and shippers both wish to avoid long dwell times. Carriers, in particular, prefer to make money through picking up the next load on time versus getting paid detention on delayed loads," he said. "DLTs may eliminate these ubiquitous losses enough that many categories of current ecosystem participants may experience net surpluses."

He added that technology often develops first in a single mode, but later expands to benefit all types of transportation, citing the emergence of real-time GPS tracking through connectivity with trucks and trailers.

McLeod believes that blockchains with standards will have to be interoperable across freight modes. To buttress his point, he noted that "among the largest modern shipper blockchains, almost all of them involve multiple modes, often for the same shipment."

In the U.S., several steps need to happen for blockchain to advance intermodally.

One element for blockchain to work effectively and to realize its potential is the development of standards, which will be needed for payment systems and any other transaction involving multiple parties. It remains to be seen how these standards evolve, both within an individual freight mode or an intermodal move. The Blockchain in Transportation Alliance, or BiTA, has been formed with the stated goal of creating them.

"Intermodal fits the blockchain concept perfectly," said John Kingston, head of community engagement for BiTA, because it can tie together disparate information systems through the use of DLT.

The distributed ledger will be an improvement over current information systems, because all portions of a movement through the intermodal supply chain will be recorded on a single blockchain or multiple DLTs that are linked instead of on separate systems, Kingston said.

"There will be stronger data ties among the members of the distributed ledger. As a result of this, there will be far greater efficiency and security across the commercial sector," Kingston said. "The biggest disruption will come in the back offices. Documents still flow through email and other old processes, as opposed to the flows that take place along a smart contract designed to solve these problems."

"The industry needs and wants standards," said Kingston, because of the broad recognition of the cost, efficiency and security benefits once they are developed.

"Standards are always a challenge," McLeod said, noting that BiTA has engaged a third-party development group to accelerate the process and reduce risk. "The BiTA standards will be open license and targets first results by late May with ongoing technical working groups continuing on several fronts."

Efforts to create standards, "will allow disparate blockchains between supply chain partners to interact with one another in standard data transmission formats," McLeod said. That will encourage information flow across modes.

Collaboration among various consortia, such as BiTA and the Wall Street Blockchain Initiative, will be key to determining how soon standards will be practically implemented, said McLeod. "It will not take years [to develop standards] if these other consortia successfully collaborate with BiTA and other organizations."

"The value will only be realized through standards-based blockchain development," he said. "Otherwise we will be creating another electronic data interchange type of situation. Blockchains can still work in a non-standards-based environment, but the promised efficiencies will never be realized."

Elenjickal praised blockchain as "a disruptive force that will benefit all participants. The reality is that it will take a few years [for standards] given the immense fragmentation of the ecosystem [and] the newness of the technology."

In the intermodal sector, there has been progress overseas. "Cross-border boundaries and documentation are easier there," Leonard said.

One intermodal example he cited was in China, where sensors were put on wine labels to ensure that the wine in the bottle matched the contents described on the label while it was shipped intermodally by truck and vessel. Information about the shipments was accelerated from a 6 to 8-day process to as little as 12 hours.

Government agencies in Dubai and Israel will require blockchain for freight documents within a few years.

There are still no U.S. examples of blockchain in intermodal transport, Leonard said, in part because U.S. Customs, which would have to be involved, hasn’t yet embraced the concept.