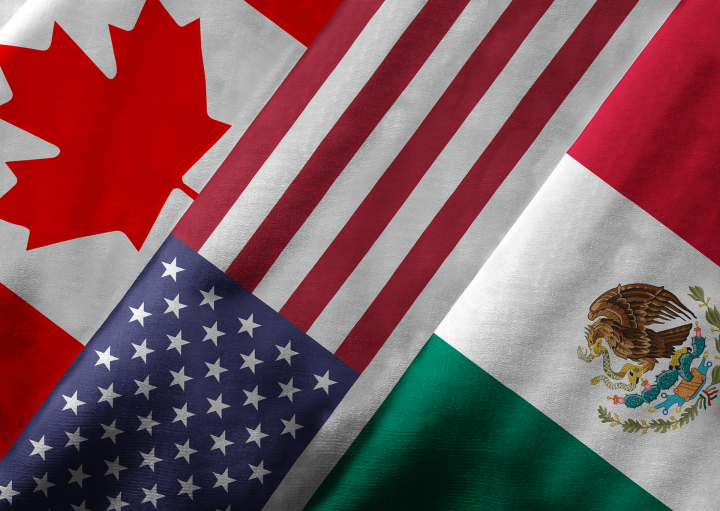 Despite the North American Free Trade Agreement seemingly on its way out and a replacement eventually on the way in, the effect on North American cross-border intermodal has been negligible to this point, comments from major stakeholders in the Canadian and Mexican markets indicate.

"Although the NAFTA negotiations generated concern in several industries, in constant communication with our cross-border customers, we have only gotten the impression that it has been business as usual," Kansas City Southern Railway spokeswoman Doniele Carlson told Intermodal Insights. KCS owns and operates Kansas City Southern de México, which operates in northeastern Mexico.

The details of a replacement for NAFTA, called the United States-Mexico-Canada Agreement, or USMCA, were unveiled by the three countries in late September. If ratified, it could usher in a new era in cross-border trade.

Importantly, it guarantees Canadian and Mexican manufacturers expanded access to some large American markets, such as cars and light trucks, and also reduces barriers for American dairy farmers to sell cheese, milk and other products to Canada. But Chapter 19, an arbitration tribunal for resolving trade disputes that the Trump administration had sought to eliminate, is being retained.

The American Trucking Associations, Canadian Trucking Alliance and National Tank Truck Carriers have all endorsed the deal, saying that a continuance of free trade between the three countries would only help the trucking industry.

Although the USMCA was unveiled Sept. 30, it has yet to be ratified by the legislatures of the three countries. And although that could change in the coming months, there's been little indication that the pending NAFTA replacement has begun to play a role in how cross-border trade is handled.

"The new agreement that will replace NAFTA provides predictability to the market," said Stéphane Morency, president and CEO of the Maritime Employers Association, the Canadian non-profit organization comprised of member companies working in the maritime sector. Members of the MEA include ship owners, operators and agents, plus stevedoring companies and terminal operators at the ports of Montreal, Trois-Rivières/Bécancour, Hamilton and Toronto.

According to the MEA, the incoming trilateral accord is expected to result in employers in and around the Port of Montreal adding 50 new workers to handle expected increased terminal traffic.

But in Mexico, no bump in trade agreement traffic is apparent, at least in the near term.

"No customer [has] reduced their engagement in the market, nor are we aware of any cancelled investments in Mexico, resulting from uncertainty," Carlson remarked. And in fact, she said, KCS' franchise cross-border revenue grew 18 percent in the third quarter of 2018, on top of 19 percent growth in the second quarter.

However, also in the third quarter, congestion at two Mexican cross-border switching facilities, Monterrey and Sanchez, resulted in cross-border service deterioration. KCS President and Chief Executive Officer Patrick Ottensmeyer has said that the railroad is looking to implement elements of the precision scheduled railroading model that can be helpful in getting it through the congestion issues.

North of the U.S. border, one railroad is moving forward with a plan to expand its reach in both Canada and the U.S.

In late October, rail operator Canadian National made the move of acquiring a trucking company, Winnipeg-based hauler TransX Group, in an effort to help CN boost its intermodal operations. TransX, which will continue to operate independently from Montreal-based CN, will provide CN with access to 1,500 trucks, 4,000 trailers and 1,000 intermodal containers across its 12 North American hubs, according to CN. It also has 12 terminals in western and eastern Canada and the Midwestern U.S.

"This allows us to deepen our supply chain focus, strengthening our franchise, including intermodal business, notably the fast-growing refrigerated segment," CN CEO Jean-Jacques Ruest said of the transaction. "This alignment creates a solid framework to serve a growing consumer economy with transportation options that bring more supply chain flexibility to our customers."

Intermodal, which accounts for about 25 percent of CN's total business, was up 8 percent in the third quarter of 2018 from the same period a year earlier, according to company data. The company credited growing volumes of overseas traffic coming through Canada's main ports, Prince Rupert and Montreal.

During an earnings call with investors in October, Ruest said that trade tensions caused by heavy tariffs imposed on goods by the U.S. and China during the July to September timeframe led to some importers and exporters moving goods earlier than they normally would have in order to avoid the tariffs' implementation. He also said that the tariffs are expected to result in Canada-Asia trade diversifying geographically from the current situation of cargo traveling mostly to and from China.

South of the U.S. border, the Mexican intermodal market is being heavily impacted by foreign trade, currency exchange and cargo security, Carlson said, with an increase in foreign trade with the U.S. or with overseas countries sustaining "a healthy growth" in the country's transport needs.

"The Mexican market remains strong with a growing middle-class needing goods in many cases imported from abroad, as well as a continued growth in manufacturing requiring both parts and raw materials to be brought in and the finished product distributed," she said. "This supports both a good domestic market in the country and a very healthy cross-border intermodal market.

"Shippers are often increasing their focus on intermodal as a much safer alternative to over-the-road transport."
Doniele Carlson
Kansas City Southern Railway

"For Mexico, like everywhere else, intermodal service is largely a function of capacity," she continued. "The railroads keep investing in line of road maintenance and expansion, terminal expansion and other necessary infrastructure, as well as locomotives and cars." Also, she added, access to an acceptable fleet of chassis and dray carriers in the markets served by the various intermodal terminals is key to ensuring overall capacity.

Among the other key factors influencing the intermodal market in Mexico, she said, is the value of the peso, which has two potential effects: one, impacting foreign trade by way of products being more or less competitive to buy from or sell to Mexico; and two, a pricing impact where the cost of manufacturing or transporting goods in Mexico may change with a different valuation of the currency.

Additionally, she said that security is always a concern for shippers. "With insurance premiums and the cost of losses going up," she said, "shippers are often increasing their focus on intermodal as a much safer alternative to over-the-road transport."