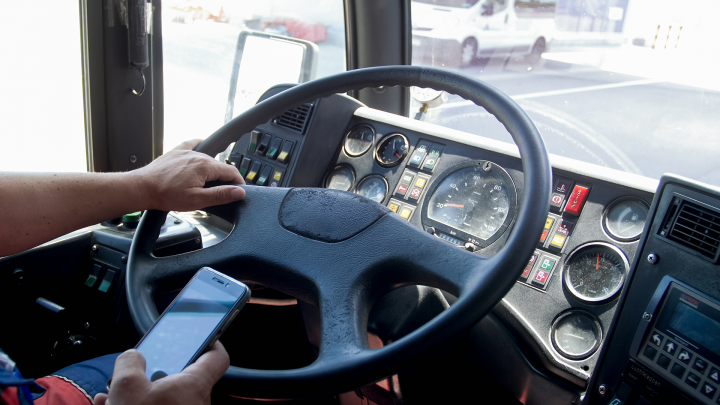 Ever since the widespread adoption of handheld digital technology like smartphones and electronic tablets over the past decade-plus, there’s been more and more potential distractions to keep intermodal truck drivers’ attention away from the primary task at hand — driving a truck.

As you might expect, industry experts and observers have said that cellular phones and other personal electronic devices are among the biggest causes of distractions for drivers.

National Safety Council spokesperson Maureen Vogel said that although the NSC doesn’t keep data regarding how many of these fatalities are specific to the intermodal space, distracted driving in the industry is definitely "a plague" on American roadways.

"The problem has only worsened with the advent of dashboard systems that allow drivers to talk, text, email or even order coffee through voice activation," she said. "But distractions can [also] include eating or drinking, turning around to talk to backseat passengers, or doing any personal grooming."

"The amount of [insurance] claims each year due to drivers utilizing laptops while driving is staggering," Cindy Verrecchia, an account executive with Bondar Insurance Group, said, adding that while there are numerous ways for intermodal drivers to become distracted, navigating some sort of electronic device is the leading cause.

Vogel said that anything that takes intermodal drivers’ focus off the task of driving should be reserved for the parking lot.

"When the vehicle is in motion," she remarked, "you should just drive."

Thomas DiSalvi, vice president safety and loss prevention with trucking company Schneider, said that the main problem with cellular phone calls and texting in the trucking industry is that unlike during the age of CB radios — in which conversations tended to be transactional and for a brief period — cell phone calls and texts are physical distractions that mentally take you to a place beyond the driving environment.

"Passengers also can be a distraction, but they have the ability to alert a driver to a potentially dangerous situation," he explained. "In a phone call or text message, you are taken out of the driving world and into their world."

"The advancement of technology allows operators, whether it is trucks or other forms of transportation, to multitask when the task at hand should be driving," DiSalvi continued. "When you attempt to do something else, it takes that attention away from the situation at hand. All it takes is a second to lose awareness."

The question is, since personal technology, such as cellular phones, MP3 players and tablets have been established as a leading cause of distracted driving in intermodal, should drivers have their use of personal or company electronic devices like smartphones, tablets and MP3 players tracked and/or curtailed, either by their employers or regulatory bodies?

"While on company time a driver’s personal use of electronic devices such as smartphones, tablets, laptops and MP3 players should be tracked and treated as company property while under dispatch," she said. "The trucking company should reserve the right to control such devices which are being used during the course of the driver’s work hours. Trucking companies should have access to information that allows them to know that a device is being used at inappropriate times. This will allow opportunity to take action that might prevent future accidents from occurring."

"Texting while driving is a growing trend that has endangered many and has also taken many lives," she added. "Over the past few months we have heard of many accidents that have either severely injured or taken the lives of occupants in vehicles that are hit due to a distracted driver that is either texting or talking on the phone. When an accident like this occurs, the trucking company is immediately liable for the damages incurred whether it be property damage or bodily injury to the parties involved."

"How can we hold a trucking company and its assets responsible for a driver’s actions if they are not in control of what is taking place while under the authority of the company?" she asked rhetorically.

She added, however, that transportation companies need to "toe a tight line" between implementing prudent safety measures and intruding on a driver’s personal privacy.

Like Verrecchia, Vogel said that trucking companies should be proactive when it comes to ensuring that drivers are doing the right thing.

"Employers play a vital role in ending distracted driving," Vogel said. "NSC advocates for all employers to implement policies prohibiting employee use of electronic devices behind the wheel."

DiSalvi said that his company is among those that have such policies, with the limited exception of emergency calls to 911.

"Schneider’s message is ‘hands on the wheel, eyes on the road, mind on the task’," he said. "We want clear expectations. There is an important reason to make sure the drivers are aware, and help them understand. They need the assistance, so they don’t have to worry about something else, such as whether billing has received. They can obtain that information audibly, which takes away the need for them to be on the phone while driving. That means they don’t feel they have to make a call, or make a stop by the side of the road."

So what are some tips regarding how truckers can cut down or eliminate distractions while driving?

Jeffrey Hickman, a research scientist with the Virginia Tech Transportation Institute Center for Truck and Bus Safety told Intermodal Insights that his organization’s research into distracted driving within the commercial trucking industry shows that hands-free voice activated cell phone use is safe.

"If a hands-free device requires one button press, it’s safe. If it requires you to look at the phone, to dial the phone or other things, then no, you shouldn’t," operate it while behind the wheel, he said. "The only thing that we advocate is hands on the wheel, eyes on the road and completely voice activated."

However, he said, if the phone doesn’t have Bluetooth capabilities or other features that make it compliant with FMCSA regulations, then it should be turned off while driving.

"That’s an easy, quick free fix right there," he said.

"The best way to curtail distracted driving is to turn off your phone when you get into the vehicle," she said. "Put it in the glove compartment or the backseat so you are not tempted to use it. If you stream music or podcasts through your phone, download the songs or episodes first, set the playlist, and place your phone on airplane mode so you cannot receive calls or texts while driving."

According to Jack Van Steenburg, the chief safety officer and assistant administrator for the Federal Motor Carrier Safety Administration, distraction was reported as a factor in 6% of the large truck and bus fatal crashes in 2017, the latest year for which data is available.

"The biggest tip that I would recommend is getting plenty of rest and take breaks throughout your trip," Van Steenburg, said. "That would cut down on the cognitive distraction. As for physical distractions, do not use hand-held mobile devices while driving — which has long been prohibited by Federal Motor Carrier Safety Regulations. Also, keep necessary items easily accessible so you do not have to reach. Lastly, eat while taking a break and not while driving."

Verrecchia said that a useful tool is for companies to take actual scenarios of recent accidents that have occurred due to texting and/or talking while driving and how it has impacted the lives of those who were involved.

"Take time to show videos and reiterate time and time again the way many lives can be impacted due to a few moments of negligence on one’s part," she said. "Know the rules of the road, offer general testing to be up-to-date on the laws and remind those of the consequences for breaking the laws."

"It is important for trucking companies to implement driver hiring practices that involve videos, classes and/or testing to insure they are doing their best to educate drivers on the importance of distractive driving," she said.

DiSalvi said that training workers on the importance of having a no cell policy is an important tip for companies, as well as training drivers on new technology in the truck.

"If they aren’t completely familiar with the equipment that is on what they are driving, we need to make sure they know how to get information — what does that light or noise mean — so they aren’t distracted by that."

"I think it all comes down to a policy and telling the drivers what the policy is and making them aware of that policy," Hickman said.

"As it is for all of us, it is all about having the personal commitment to not have distraction — know enough to put phone off or put away from controls to eliminate temptation," DiSalvi continued. "For those loved ones who might be calling, know that if you think I am driving, don’t call, or if you have to call, leave a message and know that I will call back."

Lane Kidd, managing director of The Trucking Alliance, an industry-based safety coalition of freight and logistics companies and other business partners, said that with the right reforms and technologies, all large truck crash fatalities relating to distractions could be eliminated.

"The toughest challenge is to change driver behavior, both the commercial driver and the public," he remarked. "Carriers are doing a consistently good job at making sure their drivers know how they endanger themselves by taking their eyes off the highway, even for a few seconds."