INTERMODAL THRIVING IN 2018 THANKS IN PART TO GLOBAL ECONOMIC GROWTH, EXPERTS SAY 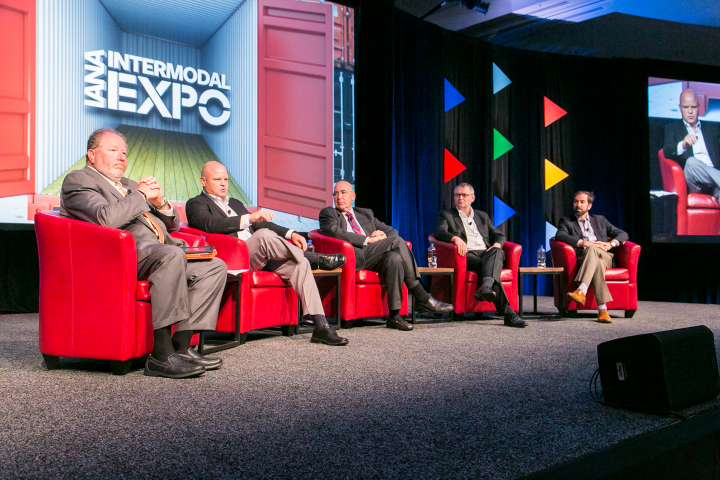 Intermodal Thriving in 2018 Thanks in Part to Global Economic Growth, Experts Say

A steadily rising intermodal growth rate, ever larger oceangoing vessels going into service, and the widening of the Panama Canal are all among the factors currently shaping the future of the intermodal market in the U.S. and across the globe, according to panelists who spoke on the issues during the annual Intermodal EXPO.

Despite less than optimal growth over the past nine years, intermodal is thriving, particularly in 2018, Larry Gross, president of Gross Transportation Consulting, said during EXPO’s Intermodal FreightCast panel, which focused on where the intermodal supply chain is headed in the near future.

Gross said that gains in intermodal movements have thus far beaten the projections of 2.5 percent growth for 2018.

"Intermodal is having a heck of a year," he commented. "Right now, through the first seven months of the year, we’re up 6.8 percent. Where did it come from? The big piece of that is international. So far this year, it’s up 6 percent."

Part of the reason why international growth is so much higher than expected, Gross said, might be that volumes were moving early due to congestion concerns or the ongoing tariff situation between the U.S. and China

"I suspect that when the final notes are written on 2018, international growth is going to be somewhere below where it’s standing right now," Gross remarked.

While Gross didn’t delve into a 2019 intermodal forecast, he did state that some issues, like a decrease in average intermodal train speed due to the system having trouble digesting the growth and impeding velocity, could play a part.

"I’m expecting 2019 to be a more challenging year than this year," he said.

Also during the FreightCast panel, Evan Armstrong, president of Milwaukee-based Armstrong & Associates, which covers the third party logistics market, said that globally, the 3PL market is estimated to grow to about $968 billion in 2018 in terms of gross revenue.

"In the United States, we’re going to wind up somewhere around $200 billion, or about 8 percent growth," he said.

"We saw about 10.2 percent net revenue growth in dedicated contract carriage last year. Domestic transportation management, the non-asset freight broker guys, grew 16 percent in terms of gross revenue, but net revenue only grew 6.4 percent," Armstrong said. "So we are seeing some margin compression on the domestic transportation management freight brokerage side and a lot of that’s due to tight capacity."

"When we talk about the U.S. 3PL market being $184.3 billion this last year, intermodal represents about 6 percent of that, or about $11 billion," he explained.

On the ocean side of the equation, it’s capacity and not demand that’s driving the industry, Lars Jensen, CEO of Copenhagen-based SeaIntelligence Consulting remarked during the FreightCast panel.

"Right now in the Transpacific, the ocean carriers are actually enjoying a significant peak season, much stronger than they anticipated. However, that is not the current picture to understand what is actually happening and what is the outlook for 2019," he said.

"We still globally have significant amounts of overcapacity that was built up over several years, and even in optimistic scenarios, you’re looking at 2021 before we will see a balance between global demand and global supply."

According to Bill Strauss, a senior economist and economic advisor with the Federal Reserve Bank of Chicago, the soft recovery cycle over the past 9 years is a problem.

"The economy has been growing at what I’ve often described as a tortoise-like pace," said Strauss, who moderated EXPO’s Intermodal FreightCast panel. "Since the middle of 2009, we’ve seen growth that’s averaged just 2.3 percent. It’s a pace which has given us over nine years of growth at this point, but without having any really tremendous imbalances, domestically

The Federal Reserve in June projected economic growth this year to be 2.9 percent, while in 2019, growth is expected to be 2.3 percent. Growth is also expected to be in the 2 percent range by 2020, according to the Fed.

The risks to the economy are mainly foreign in nature, Strauss said, specifically mentioning the weaknesses in the Italian and Greek economies, while also saying that there are risks domestically.

"While we have this bit of a sugar high coming off of the tax stimulus, I think all the talk about trade and tariffs have given us a bit of a pause with regard to the risks that are out there."

Despite the slow global economic growth, there has been one area in which a boom is occurring — container traffic between Asia and U.S. East Coast ports. In the two years since the expansion of the Panama Canal debuted, some ports on the eastern seaboard have seen their fortunes rise as more shippers choose to send their merchandise through the canal. This has led to some East Coast ports investing more in infrastructure improvements in order to keep pace.

South Carolina Ports Authority President and CEO Jim Newsome, during a panel discussion on what’s next for East Coast ports, said his ports, most notably the Port of Charleston, are "playing catch-up" when it comes to infrastructure improvement projects because of the length of time between vessel construction and port projects.

"If a shipping line builds a new ship, they get it in three years. Nothing happens in the port in less than eight or 10 years," he said.

Despite that, he said, improvements must be made because of projected growth, part of it coming from inbound cargo from Asia that normally would have gone out west before the canal’s expansion.

"We believe in a continued shift in cargo to the East Coast," Newsome said.

"It was 85 [percent West Coast], 15 [percent East Coast] in 2002 in Asia trade; it’s 65-35 now. We believe it’s going to be about 50-50 in five years’ time, because 70 percent of the people live east of the Mississippi River and there’s a lot of manufacturing growth, mainly in the southeast and in the gulf."

Currently, 16 neo-Panamax services transit the canal, up from five when the new locks opened in June 2016. By 2021, about 90 percent of all commercial vessels in the world will be able to fit through the canal, but capacity will be about 82 percent, according to Argelis Ducreux, a senior specialist in international trade for the Panama Canal Authority.

"Up to now, we have seen a great increase in volume in U.S. East Coast imports coming from Asia going through the Panama Canal, up to 4,000 TEUs per month," she said. This is even though currently, just a handful of East Coast ports — Norfolk, New York, Charleston and Savannah — have the capability of handling 14,400 TEU vessels.

But ports up and down the coast are engaging in projects to make them more big-ship ready.

"The most important effect of the expansion of the Panama Canal is how the U.S. East Coast ports invest in terminals to really have the capacity, not only in cranes or draft, but also in automation, everything, just to be ready, and they really have done a great job," Ducreux said. "We have seen double digit growth in import volumes coming from Asia to the U.S. East Coast since the opening of the new locks."

"We have seen a great increase in volume in U.S. East Coast imports coming from Asia going through the Panama Canal, up to 4,000 TEUs per month."
Argelis Ducreux
Senior Specialist in International Trade, Panama Canal Authority

With the canal now having accomplished its mission of becoming a bigger gateway between Asia and the U.S. East Coast, both literally and figuratively, it is now looking to expand in other ways, Ducreux said, by introducing "value added services" in the future, such as a logistics park, a new container terminal and roll-on/roll-off facilities.

Among the ports investing in infrastructure is PortMiami, formerly known as the Port of Miami, according to Eric Olafson, the port’s global trade and business development director. Part of the reason why, Olafson said, is that the port used to receive 4,500 TEU carrying vessels at a maximum, but is now receiving 11,500 TEU ships.

"We’re seeing a huge increase in Asia trade at Miami and in Florida because of the canal and because of the growing market in Florida," he said, adding that PortMiami has experienced a 300 percent increase in ships carrying over 5,000 TEUs since the new canal locks debuted.

Overall, Miami is looking to spend more than $11 million over the next several years on infrastructure projects, Olafson said.

Lawrence Burns, a senior vice president with Hyundai Merchant Marine, said that, in response to the canal gradually shifting the balance of power when it comes to trade between the U.S. coasts and Asia, his company is planning to bring eight new vessels of 14,000 TEUs into East Coast service by 2021.

What remains an issue, he said, is how to ensure that loading and unloading is efficient, since sometimes vessels spend more time at berth than necessary. He floated the idea of inserting efficiency language into the next longshore labor agreement, and said 24-hour warehouses would be helpful.

"Hopefully, by the time we reach 2021," he said, "We will have a much smoother system to bring ships in and out."

Another matter that's a big deal, Newsome said, is the upcoming implementation by the International Maritime Organization of a reduction in the amount of sulfur in marine fuel in 2020.

IMO rules will ban ships from using fuels with a sulfur content above 0.5 percent, compared with 3.5 percent now, unless they are equipped with so-called "scrubbers" to clean up sulfur emissions. Rulebreakers will be subject to fines.

"The sulfur cap in 2020 is a big deal: it means a lot of extra fuel costs," Newsome said. "And I think the lines are going to have to cover that."