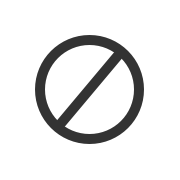 Making additional improvements to intermodal productivity is a far-reaching effort that embraces people, processes, collaboration and technology, according to a wide range of industry experts. 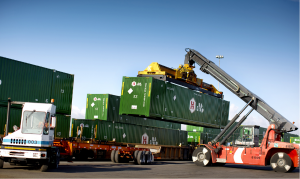 Intermodal Insights asked those experts in particular to outline progress, as well as opportunities, in terminals and international freight because that sector’s sweeping changes such as alliances and chassis supply affect every industry sector.

“It takes collaboration between BNSF and our customers to implement strategies that enable us to create capacity and meet customers’ demands,” Katie Farmer, group vice president, consumer products at BNSF Railway, told Intermodal Insights. “By working with our customers, we have been able to reduce dwell for international cargo at our intermodal facilities by more than 20% in 2016 compared to the prior year. This creates additional parking capacity at our facilities simply by working with customers to improve equipment turns.”

Among other examples, BNSF’s RailPASS mobile app is in use by more than 16,000 truckers, resulting in as much as 20 minutes saved before arrival at terminals. On the export side, BNSF developed a “Match-to-Vessel” program to help customers plan loads based on port departures, improving marine terminal productivity. Another project seeks to minimize empty mileage before export reloads.

“The key to productivity is collaboration among all the parties involved in the supply chain — from the shippers all the way to the receivers and all parties in-between,” he said.

“The key to productivity is collaboration among all the parties involved in the supply chain — from the shippers all the way to the receivers and all parties in-between,” he said.

ITS increased key benchmark ‘lifts per hour’ by 3% in 2016, Rubin said, “using a combination of laser-focus, working closer with our customers, and initiating a productivity-improvement program focused on eliminating inefficiencies and waste.”

People working together on processes make a difference too. Once again collaboration is the key.

In Oakland, the Port Efficiency Task Force tackles productivity by having people who actually move freight meet outside the pressure of daily operations, said Dan Smith, the program’s facilitator and a principal at consultant Tioga Group.

“Think about an angry trucker who is communicating with a terminal operator about a specific issue, like a suspension or an M&R bill,” Smith said. “That’s not a very good way to build a relationship. The idea is get people in the meeting who can talk about strategy, rather than beating people up over incidents.”

A key factor, he said, is to focus on long-term actions and to get all interests in the room. That way, nobody can blame people who don’t show up, he said.

For example, Smith said the regular presence of the International Longshore and Warehouse union officials has been important to address questions such as gang size. A collaborative approach yielded valuable steps to address the computer interface for appointment systems and chassis availability, he added.

“Once you get someone in the room who actually knows what’s going on, there is a thirst for information,” Smith said. “It’s not at the first meeting, but by the third or fourth one there is a collaborative approach to problem solving.”

Oakland’s task force approach also has been taken by other ports, Smith noted.

As productivity progresses, there is a key challenge ahead.

"We have to figure out more ways to more efficiently handle growth,” said Noel Hacegaba, chief commercial officer at the Port of Long Beach, referring specifically to terminals in an era when vessel size continues to rise.

“The problem isn’t that the ships are too big. It is that the terminals are too small,” he said, outlining next steps needed beyond progress such as chassis pools.

Some ocean carriers do their part by changing “block stowage” patterns to better suit terminal handling. Smoother handling is needed because efficient loading can reduce the number of “touches” by terminal operators from as many as eight to as little as two, he said.

Long Beach’s next step is doubling on-dock rail use to 50% over several years to speed cargo and reduce highway traffic. Growing the use of appointment systems also helps. Eight of 13 Southern California terminals now have them.

Hacegaba said the next step is to create a common set of business rules for appointment systems so that truckers can use a consistent set to optimize their productivity.

A common information portal for vessel arrivals will help, too, Hacegaba said. That’s being pilot tested now at the neighboring Los Angeles port.

Others underscored the importance of information process sharing and technology.

“Currently, we have a key focus on the transparency of information across the supply chain and are working with our customers to continue to improve data sharing,” Farmer said. “We also will continue to innovate by investing in technology.”

“With the development of ‘big data’ and predictive analytics, so much can be learned by sharing shipment-level information detail,” Rubin said. “We could be more efficient with more information and engagement along the supply chain.”

Technology is the key to productivity for another reason. 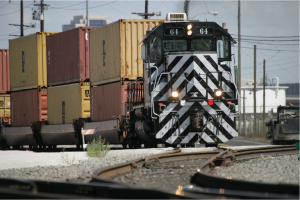 “We have almost entirely exhausted the productivity gains from mechanical actions such as higher horsepower locomotives, mega-ships and stack cars,” said Brooks Bentz, president, supply chain consulting, for Transplace. “That means the next generation of intermodal productivity gains is going to have to come from technology. The overarching question is how to use technology to make that improvement.”

There are multiple opportunities to increase cargo visibility throughout, Bentz said, particularly using predictive analytics to develop countermeasures that automatically respond to threats and disruption.

“I would rather know about an event in advance from every standpoint — chassis, gates, cranes, locomotives and trucks,” Bentz said. “I don’t want to send a drayman earlier than necessary, for example.”

Opportunities exist by looking outside intermodal, too.

Bentz believes that a much-discussed concept — “Uber for trucking” — could be applied to intermodal drayage because it has all of the qualities that have made the on-call car service successful: high density, short haul moves and plentiful empty capacity. A cross-town intermodal move in Chicago, for example, is much like Uber because the truck driver is using his own vehicle to move someone else’s product instead of a person. That process can be successfully repeated over a short time on a local scale.

Entrepreneurs haven’t tried to adopt the Uber concept to drayage, Bentz said, because they aren’t aware of the intermodal trucking opportunities.

While people, processes and technology can enhance productivity, there is one other step needed to further upgrade the intermodal supply chain.

“If we are going to remain competitive as a supply chain, we also need public and government support for permitting new infrastructure development,” Farmer emphasized.

That support is needed to fuel further growth, and counter the harm created when opponents abuse the permitting process to block notable projects.

“The inability to build new infrastructure becomes everyone’s problem because it drives up the cost of doing business and ultimately hurts competitiveness for the entire supply chain,” she said.