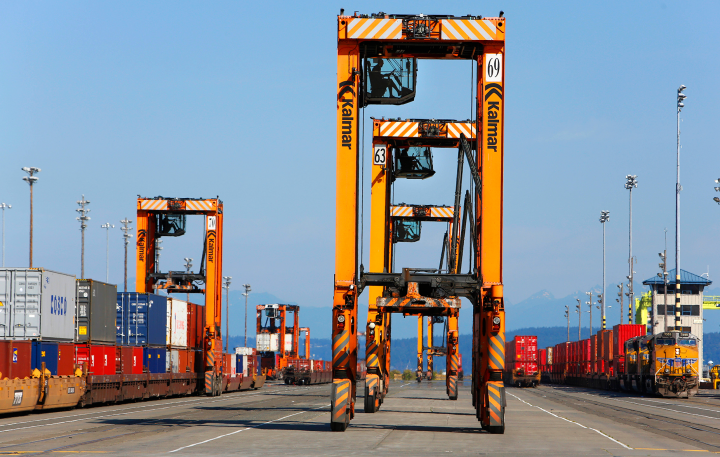 Over the past year, ocean carrier realignments through new alliances and consolidations have transformed the path of international intermodal cargo to and from North America, creating a variety of operational changes.

Since early 2017, the number of alliances has declined from four to three. THE Alliance counts five members, including CMA CGM, COSCO, Orient Overseas Container Line (OOCL) and Evergreen. The members of the Ocean Alliance are the ONE Network, Hapag Lloyd, United Arab Shipping and Yang Ming. Maersk Line and Mediterranean Shipping Co. comprise the 2M alliance.

These moves are part of a long-term shift that has resulted in the 10 largest ocean carriers now moving 80 percent of container cargo, compared with just 12 percent 20 years ago, said Lars Jensen, CEO of Denmark-based SeaIntelligence Consulting.

Officials from several key U.S. ports, as well as industry experts, explained to Intermodal Insights how the changes have affected North America’s intermodal network in a variety of ways.

"The recent consolidation and alliance changes present new opportunities for ocean carriers to optimize their services," such as vessel planning for the ocean portion, said Noel Hacegaba, chief commercial officer at the Port of Long Beach.

An example, he said, was the ONE Network’s move to consolidate its inland intermodal service with a single railroad to optimize that service.

Mike Reilly, director of intermodal business development for the Northwest Seaport Alliance, said the ports of Seattle and Tacoma, Washington have benefitted from the alliances through increased business volume. The new arrangements have led rail operators Union Pacific and BNSF Railway to run daily trains that are nearly two miles long. In addition, transloading and related domestic intermodal moves are increasing. A short-haul service linking the Washington state ports with Portland, Oregon has also been started.

Reilly also explained broader forces that are at work. "We are seeing that beneficial cargo owners, non-vessel operators and 3PLs, along with the ocean carriers, are deciding which gateway do they want to call, based on service options, terminal fluidity, ease of doing business, and a road and rail network that can handle new business," he explained.

Lenis Rodrigues, a spokeswoman for the Port of New York and New Jersey, said there have been limited changes to inland intermodal freight patterns from alliance modifications and consolidation. CSX and Norfolk Southern provide inland intermodal rail services for ocean carriers that are seeking to maximize the inland head-haul and back-haul moves.

"All of the ocean carriers are taking advantage of the express rail systems to move intermodal freight well before the ships leave the port," she said, through opportunities that are available to both alliances and independent operators. "Rail volume at the PANYNJ continues to increase since the arrival of these larger ships."

The changes also have affected port operations in Long Beach, Hacegaba said, with a long-term commitment to increased utilization of on-dock rail that can be particularly useful during volume spikes related to larger vessel capacity.

Alphaliner consultant Tan Hua Joo provided Insights with a different view of the alliances and consolidations’ impact. He said there hasn’t been any change in cargo handling or vessel routing patterns as a result of the alliance shifts, other than the realignment of some all-water services through the Panama Canal. He also questioned whether the emergence of new alliances has directly resulted in greater use of inland intermodal.

Dean Davison, a consultant for Clipper Maritime, offered a similar view in one respect. The alliances, he said, fundamentally are just "a re-jig of existing lines, services and activities at the same ports."

What is more important, Davison and others said, is a broader network perspective.

"The key here is that all partners in the logistics supply chain do their part — ship arrives on time, port/terminal discharges efficiently and offers sufficient space for intermodal trains and the railroad operators then get the cargo to its ultimate destination efficiently. Intermodal rail is a crucial component of this whole process, especially as the logistics network very much remains an integral part of shipper inventories."

"Intermodal providers that are able to link key marine terminals to areas of consumption, especially the key discretionary markets of the U.S. Midwest, through regular, efficient, reliable and cost-effective services are what we still need," Davison said, emphasizing the requirement for sufficient capacity to meet demand.

William Doyle, a former member of the Federal Maritime Commission, told Insights, "The name of the game is speed — get the containers unloaded, on the dock and then off the dock as quickly as possible. The alliances are looking to see who are the best-performing intermodal ports."

As ports invest in waterside infrastructure improvements, Doyle said, they must be matched by port operations, trucking, rail, chassis and distribution center activity to keep pace.

"Any time you have change, especially in this complex international maritime and logistics sector, challenges and opportunities present themselves," Doyle added. "The challenges are usually short-term because industry will eventually adjust and figure it out."

"BCOs and 3PLs will want to see their cargo passing through efficient ports/terminals which have good intermodal rail capacity now, but also in the future."
Dean Davison
Consultant, Clipper Maritime

Hacegaba believes the relative economics of truck, rail and intermodal moves will continue to be at play. The rise in truck rates for drayage and long-haul services can make on-dock moves more appealing. At the same time, truck efficiency is being enhanced where there is greater use of appointments for pickups at port terminals.

"We would like to see our terminals work together to make sure there is a common system to facilitate appointments," Hacegaba said.

There could be more changes in store, some believe.

"I am not sure we are at the end of the [consolidation] game yet," Jensen said, because the consolidation that should have resulted in more predictable freight rates instead has produced an unstable pricing market.

Part of the reason for pricing instability, he said, is that there is still too much ocean freight capacity, despite recent increases in demand. At the same time, companies such as COSCO and Evergreen Line, both members of the Ocean Alliance, are adding capacity faster than companies such as Maersk.

"Carriers haven’t come to grips with how to differentiate service," Jensen believes. "Rates have been commoditized."

The result, Jensen believes, is new approaches being taken by some operators.

"We are looking at more beyond just the ocean carrier piece," said Greg Tuthill, senior vice president of CMA CGM (America), speaking at IANA’s Operations and Maintenance Business Meeting in May. "Offering full service might become a trend. It’s become much more difficult to differentiate service."

Inland services recently haven’t been particularly attractive to ocean carriers, Jensen said, because of extensive staffing needs and related costs. In addition, as companies consider different ways to differentiate and integrate their own services, they run the risk of alienating shippers as well as forwarders and integrators who want the widest possible choice of inland options, Jensen added.

"The reduction of four major alliances to three could mean less choice for the shipper/BCO," Davison said.

"Does the port/terminal have sufficient intermodal services, capacity to meet shipper/BCO needs?" he asked. "Ensuring that potential bottlenecks do not exist is the solution. It means that shippers, BCOs and 3PLs will want to see their cargo passing through efficient ports/terminals which have good intermodal rail capacity now, but also in the future."

"The musical chairs the carriers played initially caused quite a bit of uncertainty and a lot of extra work for the BCOs," said Steve Hughes, a consultant to shippers and vice president of HCS International.

"They often had contracts with ocean carriers that were spread among the four alliances to spread out the risk."

"After it was cut back to three, they could find all their carriers in the same alliance," he explained. "Now, the big task was to look at them and see where you could spread the risk again. That caused a lot of concern and a lot of extra work."

"The alliances may have made it easier for the BCOs, once they have parsed their freight into the three alliances," Hughes said. "They can aim for an even spread to get the risk mitigation."

Today, Hughes said, the situation has settled down after a protracted period to sort out relationships.

"I don’t see a lot of movement [in alliances] in the future," Hughes said, in part because financial uncertainties created by widespread losses and bankruptcy have abated. "Hopefully, it will be much more stable."

Truck moves through Long Beach and neighboring Los Angeles ports have been the subject of a plan to rework the PierPass system created in 2005 by terminal operators to handle cargo volume increases. Changes were approved in March that include the mandatory use of appointments and a flat fee for all pickups, regardless of time of day. Today, a fee is only charged for daytime pickups. The changes, targeted for August implementation, require FMC approval before they can take effect.

"PierPass [as it exists today] is very damaging to the draymen," said Hughes. "It was great when it was started and accomplished what it needed to, but morphed since the chassis ownership change. Until we can get the front end (at the gate) of the ports fixed, we are continuing to have the issue [of delays]."