PTC AND PSR: THEIR EFFECT ON INTERMODAL NOW AND IN THE FUTURE 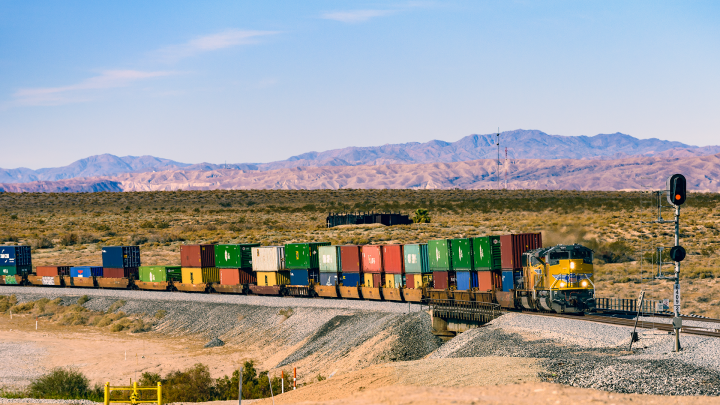 PTC and PSR: Their Effect on Intermodal Now and in the Future

Railroads have been focused on implementing Positive Train Control technology, as well as Precision Scheduled Railroading strategies, to streamline operations and increase safety. Now that PTC has been widely implemented in the industry and PSR is in the process of being implemented, how has their application affected the intermodal industry, and what could the future effects be?

PTC, a federal mandate to improve the safety of railroad operations, is designed to protect against train-to-train collisions; derailments due to excessive speed; encroachment into established work zones; and train movements when switches are incorrectly positioned.

PSR, a nonmandated concept that most North American Class I railroads have adopted in recent years, focuses on freight car movement, rather than moving trains. Under the service model, freight trains operate on fixed schedules, much like passenger trains, instead of being dispatched whenever a sufficient number of loaded cars are available.

According to the railway’s 2019 Q4 and full-year results, released Jan. 17, KCS significantly improved its operating performance compared to the year before, with a 22% increase in gross velocity, a 16% decline in terminal dwell and a 19% improvement in car mileage. KCS began implementation of its version of PSR in late 2018.

Another Class I that has begun application of PTC and PSR is Canadian National Railway. CN Vice President of Intermodal Dan Bresolin told Intermodal Insights that PSR is at the foundation of everything the railway does, and that currently, a new phase of the strategy is being implemented that includes specialized cars to inspect tracks and portals to inspect cars.

"We believe that by implementing new technology such as PTC, combined with the next evolution of PSR, we will improve safety and increase efficiencies."
Dan Bresolin
CN

Also, he said, seven automated train inspection portals deployed across their network inspect every car with HD cameras, helping to detect defects before an incident occurs.

"We believe that by implementing new technology such as PTC, combined with the next evolution of PSR, we will improve safety and increase efficiencies, allowing the company to increase its existing capacity," Bresolin explained. "This in turn allows for more business to run, including intermodal containers and other goods critical to our economy."

Chuck Baker, president, American Short Line and Regional Railroad Association, said that looking at it from the intermodal industry’s point of view, in addition to more places seeing more frequent rail service, there’s a few other things PSR has accomplished that are positive.

"It puts a real emphasis on equipment utilization and efficiency," he remarked of PSR. "That’s an important concept to anyone in the business world, and certainly folks who have investments in the hundreds of millions of dollars in terminals and containers and logistics parks and things like that."

"Railroads are in pretty decent shape financially, operationally and size-wise, and so I think PSR gets some credit for that," he continued. "That’s something that everyone in the industry should be pleased with."

But the biggest success for PSR, he added, has been in helping run more efficient railway networks.

"That means better trip time plans and better service and [being] more competitive with trucks," he said. "And doing better every day than the day before at delivering people’s stuff when and where we say it’s going to get there."

Other benefits, he said, include increased cost competitiveness and the need for fewer pieces of equipment.

"The more times you can turn a trailer in a year, the fewer trailers you need, so it reduces investment needs," he explained.

Mike Stolzman, the general manager for the New Orleans Public Belt Railroad, a Class III switching railroad serving the Port of New Orleans and local industries, agreed with Baker that PTC has had a significant impact on costs.

Although the NOPBR isn’t required to have PTC, the railroad is very acquainted with the concept because the railroad interchanges with six Class I railroads. Stolzman said that there was much reluctance and much confusion in the beginning about PTC as far as what it would look like, how it would be applied, and its interoperability.

"To their credit," he said of Class Is, "they have worked that out."

Henry Posner, chair of Railroad Development Corporation, which operates and invests in regional railway systems in the U.S. and abroad, said that PTC and the introduction of other technologies are important to the industry.

"Railroads are in pretty decent shape financially, operationally and size-wise, and so I think PSR gets some credit for that. That’s something that everyone in the industry should be pleased with."
Chuck Baker
American Short Line and Regional Railroad Association

"In the long run, as long as the technology proves to be reliable and interoperable, it will be good for the industry, probably for completely different reasons than it was originally intended. Keep in mind, PTC does not prevent low-speed collisions. But I do think that with the passage of time, it will ultimately prove its worth, probably for completely different reasons. Because, if nothing else, it paved the way for autonomous trains, and keep in mind that the government’s promoting autonomous trucks. So if the government is committed to autonomous trucks, then surely the idea of autonomous trains might be an even higher imperative."

He said the freight rail industry has done a great job of meeting the mandate, but it’s unclear in his mind as to whether PSR is proving to be successful in doing for railroads what it was meant to do.

"PSR has seemed to work for the Class Is in lowering the operating ratio, but it has not been successful in serving as a pathway to [volume and financial] growth in this country," he said. "Where it has served as a pathway to growth is Canada, because it allowed CN to make some structural changes that made it more cost efficient."

Hub Group’s chief solutions officer, Vince Paperiello, said one benefit from the implementation of PTC is that railroads now have a lot more data on the ongoing positioning of their equipment.

"I think that they probably have much improved data that they can apply to predicting things like estimated time to grounding, which helps us in our planning, as an example," he said. "I think the information they’re gathering now due to the implementation of PTC is probably something that they’re going to be able to leverage to provide an improved and more reliable product."

Baker agreed that PTC’s role in the rail industry is likely to grow and evolve in the years to come.

"I think over time, there’s a lot of excitement about PTC creating a digital backbone for the industry to be able to use to drive operational improvement," he said.

Carlson echoed the belief that use of PTC still holds a lot of promise.

"PTC technology will continue to evolve to improve rail operations safety and automation, which will lead to improved network capacity and running trains faster and more efficiently with reduced service interruptions," she said. "With these benefits realized, our customers will see greater reliability and availability of service."

"As the rail network continues to improve in terms of speed, efficiency, reliability and predictability due to PSR practices, KCS and KCSM expect intermodal to gain competitiveness from a transit and service perspective," she added.

"With trains arriving on time, departing on time, that’s got to be a huge boost to the logistics chain on the intermodal side," Stolzman said. "The downstream effect is the end users or the distribution centers are going to get much more reliable service, which can only help. I think it’s going to have a trickle effect all the way through the economy.

"I think there’s still a lot of growth left in intermodal. It’s an exciting time to be here. When all these clouds separate for us, I think it’ll be a breakout for the rail industry."